The show was short and sweet this year. I’m glad I shot this from Sand Island since they launched the rockets from the Aloha Tower parking lot. Got up way too early this Saturday for a photo shoot with some friends at Halona Blowhole. Luckily the weather cooperated and I got a lovely shot of the blowhole against the sunrise. Star trails are more fun than time lapse photography in my opinion. Mostly because I like to show the effect of time passing in a single frame. There is something about long exposures and capturing a pattern. When images are strung together into a time lapse video it is easy to appreciate the motion, but it is just as easy to forget it a second later. Here are a few tips To make a memorable star trail photo. 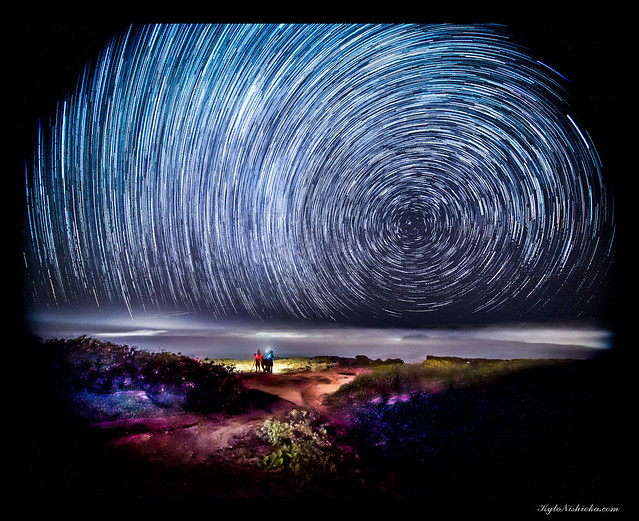 One last part I almost forgot to mention. The software I used to create the star trails is StarStaX and Startrails. Either of these programs will automatically stack your photos and create the star trails. They are both free programs and do not need Photoshop or any other image editing software to run. StarStaX is cross platform and runs on Windows, Mac & Linux. StarTrails is Windows only.

A local makerspace group, HICapacity held a night photography meetup at Mokuleia on Friday. There’s really only one really good spot for stargazing on Oahu and that’s at the end of Farrington Highway in Mokuleia. There’s so much light pollution in town and even in central Oahu, that you have to go to the farthest part of the north shore to get away from it. I shot a time lapse video of the total lunar eclipse in 2011 from this spot. Here are a few advanced tips that go a long way to make a good photo of the night time sky.

So now that you’ve got some additional tools under your belt, check out Dark Sky Finder to find the best viewing area in your neighborhood and plan your next nightscape outing.

In case you haven’t been keeping up with retro trends, hooping has been making a comeback. Both guys and girls have been picking up PVC tubing and shaping them to their will. Sometimes they add a bit flare to their hoops with strings of LED lights and a controller chip to make them blink and change colors. These hoops can be used to paint with light when shot as a long exposure. There are a few things that you need to know to get a good light-painted photos.

1. LEDs are relatively dim by photography lighting standards. In dark conditions, they stand out pretty well, but they don’t light up the subject in any meaningful way. The LED hoop in the photo above was especially bright. I’d guess it is roughly 1 – 2 stops brighter than the other hoops I’ve photographed. Even so, the subject is lit by a SB-900 from camera left. And notice that you can’t see any ghosting of the subject from the LED lights.

2. To balance the light between LEDs and flash, meter your exposure for the LEDs and add fill flash to light the subject. You only want to add a kiss of light for fill.

3. Generally you do not want to spill light on the background so keep the power level pretty low, take the flash off of the camera and move it close to the subject. If you have a snoot or grid, that will work even better to minimize the spill.

4. Use bulb mode w/ rear curtain (or 2nd curtain) sync to control the start and stop of the capture. It doesn’t really matter when you start the exposure, but you will want to close the shutter before the hoop has made too many revolutions. Rear curtain sync captures the subject at the end of their move.

Above all else, the thing to remember is that the photo should be about the hooper and not the hoop. Try to time the capture so that their face is not obscured by light trails. But don’t let that stop you from experimenting or letting the hooper show off their moves. I’ve been using Adobe Lightroom since version 2 and I’ve had it crash on me maybe a hundred times over the years. Most of the time it is some kind of glitch and I pickup where I left off. On rarer occasions, Lightroom locks up while in the middle of opening a catalog. I’ve been able to troubleshoot those problems with a little bit of Google-fu. Today’s crash was the most frustrating one to date. None of the usual tricks worked and I was about to give up and pull out a backup catalog. Except that the backup catalog wouldn’t load either. Neither would the previous backup, nor the one before that.

So, obviously there is a whole lot wrong. Here’s how I ultimately fixed it.

1. Delete the Preferences file (*.agprefs) that is stored in %APPDATA%\Roaming\Adobe\Lightroom\Preferences. You could simply rename the .agprefs file, but I’ve never come back to a corrupted one. The .agprefs file contains some Preferences info and most importantly it contains the location of the most recently used catalog. If you run Lightroom like most people, LIghtroom will open the most recent catalog you’ve previously opened. You need to get Lightroom to start in a blank state where it does not try to open a catalog automatically. Deleting the .agprefs file will do this. And don’t worry, a fresh and clean .agprefs file will be created once you’ve gotten Lightroom working again.

2. Delete the ***Previews.lrdata folder and find a backup catalog to restore. I use Crashplan as my general safety net that saves my bacon when a hard drive crashes (and that’s happened once already). But I find that Crashplan is not always the easiest to use when I just want to restore a single file or folder. So, I store my catalog file in my Dropbox folder, as do the current batch of photos I’m working on. When Lightroom craps out, I restore a previous version of the catalog file thru Dropbox’s version history. Usually the version from the day before the crash is good enough. Hopefully, you have some sort of continuous backup solution protecting your catalog and photos too. If I had to rely on Lightroom’s built-in weekly backup feature, I’d be screwed. Deleting the Previews.lrdata folder was the key to recovering from my latest Lightroom mess. And I suppose it would be a best practice to delete those preview files anyway since eliminating the previews makes a catalog load faster. The previews will be regenerated after the catalog has been restored.

3. Launch Lightroom. It should prompt you for a catalog to load.

4. Select the backup catalog and verify its integrity.

5. Lightroom should now open the catalog without any problems, assuming that the catalog passes the integrity check.

Here’s the setting under Edit –> Preferences where you can make Lightroom open without loading the most recent catalog.

Oh, and one more thing you might want to consider. If you save your RAW images in DNG format, you can save your Lightroom edits and tagging directly in the DNG file. The function is under Metadata –> Update DNG Preview & Metadata. This way, even if the catalog file is totally unrecoverable, you can still salvage all of your editing and metadata. You can simply import the photos into a new catalog and pickup where you left off from there.

My favorite shot from a photo firewalk w/ Ricky Li at Ala Moana.